You are accessing PEP using an unencrypted connection. For your security, PEP only supports account logins using a secure protocol such as HTTPS. You can switch to HTTPS by trying to view this page again after changing the URL in your browser's location bar to begin with "https" instead of "http". Please contact site admin for help if this error continues. 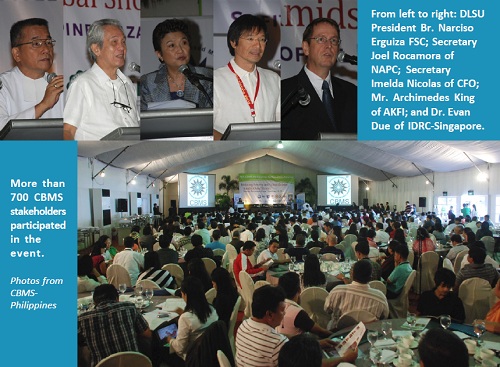 More than 700 stakeholders of the Community-Based Monitoring System (CBMS) participated in the recently concluded 7th CBMS Philippines National Conference held at the Sofitel Philippine Plaza in Pasay City on  February 7-9, 2011. The 3-day conference attracted the biggest attendance as yet of CBMS practitioners, academicians and policymakers, including at least seven governors and 143 municipal mayors.
Under the theme “Reducing Poverty and Vulnerabilities Amidst Global Shocks,” the conference featured presentations on the national poverty reduction agenda, status of the Millennium Development Goals (MDGs) in nine provinces, disaster risk mapping and adaptation strategies to climate change, developing partnerships for development, issues and challenges on program targeting and impact monitoring, and monitoring child welfare.
Br. Narciso Erquiza FSC, President of De La Salle University, gave the welcome remarks and expressed his view that the CBMS and the local-level information that it provides to local and national government have proven indispensable to program implementation and for policymaking. “Providing information is the biggest strength and most important service of the CBMS, lending large assistance in our fight against poverty,” Br. Erquiza noted further.
Secretary Jesse M. Robredo and Secretary Joel M. Rocamora of the Department of the Interior and Local Government (DILG) and National Anti-Poverty Commission (NAPC), respectively, echoed this sentiment as well. In his message featured in the souvenir program, Secretary Robredo underscored the urgency of covering all provinces nationwide by 2012. He further said that it is his wish “to see other provinces, and their component cities and municipalities, adopt and implement the CBMS and eventually enhance local governance to provide a better quality of life to their constituents.” Meanwhile, Secretary Rocamora pointed out that “through the CBMS, we have been able to build the capacities of  our local government units (LGUs) to develop and enrich their databases, thereby enabling them to design, target, implement, and monitor their own social services and programs.”
Secretary Imelda Nicolas of the Commission on Filipinos Overseas (CFO) for her part revealed her agency’s plan to use CBMS in guiding “diaspora philantrophy.” She said that the CFO will utilize the CBMS poverty maps to inform and educate donors on where best to put their donation to work.
“With CBMS, for instance, we can generate more donations specifically targeted to waterless areas, direct  medical missions to areas with higher reported rates of disease,  infant and  maternal mortality, increase school buildings where there are none, and scholarships to children in households that need them  most. This will also prod many of the LGUs to institutionalize CBMS in their planning procedures. Knowing that donors look at CBMS to guide their philanthropy will prompt more and more LGUs to invest in the system, in the process increasing the level of transparency in local governance particularly in terms of development planning,” Secretary Nicolas further noted.
Mr. Archimedes King, President of the Angelo King Foundation Inc. (AKFI), on the other hand, said that the wide coverage of CBMS all over the archipelago bodes well for grant-making donor organizations such as the AKFI. He pointed out that these organizations always spend a significant amount of their resources in trying to establish baseline information which is critical for their monitoring processes. But with CBMS in place, these organizations can reallocate the money initially allotted for data collection activities to direct program cost. “For AKFI and similar organizations, this means that we will be able to help more people help themselves,” Mr. King added. He then disclosed his intent to collaborate with the CBMS Network in establishing a competitive grants program where LGUs can apply for a grant for a school building project.
Meanwhile, Dr. Evan Due, Senior Regional Program Specialist of IDRC, said that they have been supporting CBMS as an international partner since its inception. “CBMS reflects, in my view, IDRC’s core value of partnership in development research,” he noted further.
Organized by the PEP-CBMS Network Coordinating Team of the Angelo King Institute for Economic and Business Studies (AKIEBS) of the De La Salle University-Manila (DLSU-M), the conference was also supported by the International Development Research Centre (IDRC), Canadian International Development Agency (CIDA), United Nations Children’s Fund (UNICEF), United Nations Development Programme (UNDP), National Economic and Development Authority (NEDA), Economy and Environment Program for Southeast Asia (EEPSEA) and the Angelo King Foundation, Incorporated (AKFI).

The 7th CBMS Philippines National Conference was held at the Sofitel Philippine Plaza at the Grand Sunset Pavillion.
Program